A traveler passing through Lyon County in 1890 writes, “Admit that the Garden of Eden was located on this continent, then I can trace its location, for nowhere else on the American continent are so many evidences of its probable location, as here in Lyon County.”

An early historian says, “We doubt if anywhere in the United States may be found a more fertile and beautiful region of country than is embraced within these limits.”  He speaks of early settlers coming here because they were encouraged by “tales of the wonderful beauty of Lyon County.”

Indeed, from what we read, one of the first things that struck most of the pioneers when they came here was the “wondrous beauty” of this place.  They cannot seem to say enough about the smoothly undulating surfaces of the land, the almost complete freedom from stones, hills, bluffs, and stagnant waters.  They speak of “just enough elevation and depression of surface to allow perfect drainage.”  The pure clear streams meandered through all portions of the county, making the landscape “ever a feast to the eye.”

The railroad official who was in charge of laying the tracks in our area had two children named George and Edna.  It was at his request that the two towns be named after his children.  The coming of the railroad was the determining factor in the establishment of the town of George, as it was in the establishment or growth of most towns at that time.

Often the supervisor of the railroad decided where new towns were going to be located along the way.  They generally attempted to route through towns already established, and when a town was by-passed by the railroad it was called and “inland town” and soon died out or was relocated.

So it was when the tracks were laid this far, the official in charge gave orders to lay a side track and put out a box car for a depot.  This was the beginning of the town of George.  From the time the first train went through George on December 25, 1887 until many years later when cars and trucks took over, everyone in town or the country depended in one way or another on the train. 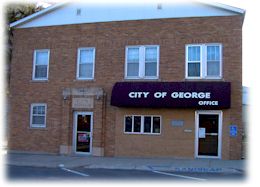